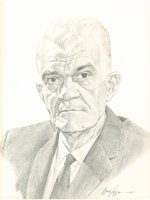 “Doc” Cruickshank loved the agricultural industry, and passionately believed that rural people were deserving of the same kind of cultural and informational services as their urban neighbours. He established station CKNX in Wingham in 1926 and it was always known as the “Ontario Farm Station”. Free broadcast time was made available to local Agricultural Representatives and county farm organizations to keep their membership informed.

In 1939 the first of a trial series of Farm Radio Forum programs was aired on CKNX, paving the way for the National Farm Radio Forum programs on CBC. A full-time Farm Broadcast department has served the farm population continuously since 1949. When a television license was granted in 1955, CKNX accepted a new challenge in serving a rural based audience, and became a model for local television service.

W. T. Cruickshank served his community through the Church, Service Clubs and Town Council. The Town of Wingham recognized his efforts by naming “Cruickshank Park” in his memory. He provided a training ground for broadcasters who would influence the agricultural industry all across Canada and set the standard for the station’s motto, “The Voice of Community Service”.