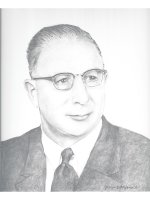 W. J. “Wilf” Schneller owned Spruce Grove Farm at Baden, recognized for its excellent herd of high producing Ayrshires. But it was Mr. Schneller’s drive to learn about new practices, test them with extension and academic partners and then to inspire other farmers to adopt new technology and management solutions which set him apart as a key agricultural leader of his time.

In the 1930’s, Wilf adopted balanced feed rations for his Ayrshire herd, along with rotational grazing of forage fields. The easiest way to do this was to divide the fields using barbed wire fencing. So, Wilf and a partner designed and manufactured the Baden Electric Fencer and sold it throughout Ontario, greatly facilitating rotational grazing.

As a devoted conservationist, he also began to implement new soil and water conservation methods on his farm, including contour ploughing, grassed waterways, minimum tillage, tiling and strip cropping to inhibit soil erosion. Through farm tours, demonstration plots and presentations, he showed others how to employ these practices. In 1954, he became the President of the Ontario Soil and Crop Association, and from 1954 to 1968, he was an Executive Member of the Ontario Conservation Council. In 1959, he was made an Honourary Member of the Soil Conservation Society of America. Throughout this time, Wilf was employing soil and water conservation practices on his farm including tree planting, and using his farm to promote sound conservation practices throughout the agricultural community.

Next, Wilf Schneller and Agricultural Representative Sandy Forsythe decided to develop an Arboretum near New Hamburg which opened in 1964. Its purpose was to have as many as possible of the native trees of Canada planted there so they could be studied by the students at OAC and others. On his own farm he planted over 56 tree varieties, recognizing that farmers had a duty to encourage forestry and limit clear cutting on their farms.

To honour W.J. Schneller’s contributions to agriculture and conservation, he was awarded the Canada Centennial Medal in 1968, and in 1984, he received the Ontario Bicentennial Award. Also, in 1984, he was given the Honour Roll citation from the Grand River Conservation Authority for his extensive work in soil and water conservation.

Wilfred Schneller was a person ahead of his time and is most deserving of induction into the Ontario Agricultural Hall of Fame.