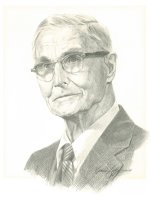 During his 98 years as a farmer in Water1oo County, Will Barrie influenced the lives of thousands. His interests were wide and his involvement wholehearted.

Mr. Barrie was a registered seed grower and President of the Canadian Seed Growers' Association (CSGA) in 1930. He showed seed at the first Royal Agricultural Winter Fair in 1922 and in 1936 was named a Robertson Associate by the CSGA.

Will Barrie was active in woodlot management and was a director of the Ontario Tree Farmers Association. He received the first Ontario forestry Award of Merit in 1973. He was also a founding Director of Doon Pioneer Village and received an OAC Centennial medal in 1974. In his later years he was known widely for the more than 4,500 hand-turned wooden gavels he donated to public figures and organizations.