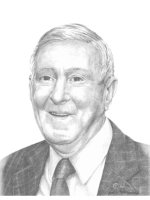 Bill Campbell graduated from the University of Guelph OAC ’55 with his BSc Ag followed by a Masters degree in 1957 and an MBA from McMaster in 1971. He established Fairlawn Sod Nursery Ltd. in 1958, which gradually spread across Ontario, Quebec, Ohio, and Florida, ultimately encompassing 7000 acres of sod and becoming, for a time, the largest sod producer in North America.

Mr. Campbell was a leader and innovator in the North American sod industry for more than 42 years, and his company helped to change the face of Ontario’s sod industry to a thriving agribusiness based on sound, scientific principles.

He excelled at locating his production farms so they were close to potential markets in order to minimize transportation costs and to keep the sod fresh. He analysed soil maps to find the best locations for sod farms, experimented with different varieties and blends of grass seeds, and developed specialized equipment for efficient production and labour cost optimization. He also established protocols for field preparation, fertilization, weed control and record-keeping, and was willing to share his knowledge and mentor other producers in the sector.

By 1969, Bill Campbell was the President of the Nursery Sod Growers Association of Ontario which developed high standards of turfgrass sod quality, and funded research at the University of Guelph on the development of species cultivars and growing techniques. It also organized professional development seminars for growers to enhance care of the environment.

In 1984-85, he became one of the first Canadians to serve as President of the American Sod Growers Association (now Turfgrass Producers International). In both 1972 and 1985, he helped to organize ASGA conventions in Toronto so that sod producers from around North America could come for professional development and to tour Ontario sod farms.

In 1987, Bill was instrumental in establishing the Guelph Turfgrass Institute and helped raise $1.5 million to build and equip this research and education facility. He served on its Advisory Board for 20 years. It is still a vital organization today, located at the University of Guelph, and a key source of research and development for the sod industry, as well as training and education for the growers, golf course managers, sports field managers, lawn care and landscape professionals, etc.

In 2000, he received the Order of OAC in recognition of his many contributions to agriculture and to the University of Guelph’s agriculture programs. That same year, he was given an Honourary Life Membership in the Nursery Sod Growers Association. In 2007, he was granted the Rotary Paul Harris Fellow Award; in 2010, the D.A. Neill Award for Philanthropy; and in 2011 the Business Excellence Award for Outstanding Achievement from the Brantford-Brant Chamber of Commerce.

Bill Campbell’s business acumen and his ability to serve as a leader and mentor to ensure excellence in an important agricultural sector in Ontario and North America, make him a worthy inductee into the Ontario Agricultural Hall of Fame.