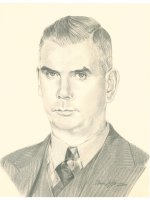 Bill Ruthven was an innovator with interests in a wide range of agricultural commodities. His parents were early settlers in the Alliston area of Simcoe County. In 1913, he was among the first to import silver-black foxes from P.E.I. to start a fur breeding business. When such furs dropped from fashion, he operated a large mink ranch.

From 1913 until 1950, he was a potato farmer and grower of seed grain, specializing in red clover, oats and barley. During the 1940’s he established a high quality Holstein herd.

The pioneer of the sod industry in Canada, Bill Ruthven saw the upcoming demand for nursery sod, and from a small beginning in 1952 he built up a 900 acre sod farm. His Ruthven Merion Sod Company won a national reputation for a high quality product. He was one of the first directors of the Nursery Sod Growers Association of Ontario, and was actively involved in turf grower groups in the U.S.A.

Mr. Ruthven’s role in his community was recognized by the erection of a cairn in the Alliston ballpark.