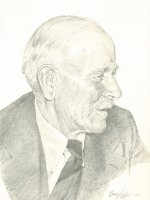 Few men in Canada did more to promote the welfare of farmers than W. C. Good. Born and raised on a farm in Brant County, he was a long-time leader of the agrarian and co-operative movements on the local, provincial and national levels.