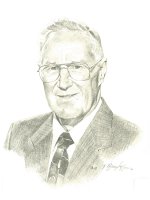 William Stanley Young, a graduate of OAC, 1949 and Cornell University, 1959 had a distinguished career in agronomy, extension and teaching with both the Ontario Ministry of Agriculture and Food and the Ontario Agricultural College spanning 45 years. In addition, he worked for the betterment of agriculture through a host of agricultural and related organizations. Stan introduced new practices, spread new knowledge and inspired others through his work and volunteer activities.

Stan Young had the uncanny ability to communicate complex scientific matters in simple terms to the layman and the student. He kept abreast of the latest developments in agronomy and translated those findings into practical, useful bits of information for his clientele through the spoken and written word. He had the insight to use the most effective means to communicate through imaginative pamphlets, fact sheets, twilight meetings and field trips. Stan could organize a meeting to get the message across and he would lead a group through a difficult series of alternatives to reach a well thought-out and well-supported conclusion. He would then see that conclusion implemented. He knew what needed to be done and was not afraid to do it. Stan wrote and edited many publications during his lifetime. For example, he set the style, format and edited the Ontario Department of Agriculture’s “Ontario Field Crop Recommendations” from 1959-1969. For years this was the authoritative guide for farmers and extension workers. He edited “Notes on Agriculture”, an OAC publication, from 1969 to 1988. From 1974 to 1992 he served as editor for “Information for Extension Personnel”. Later he introduced and edited the “Information for Industry Personnel” publication. In 1992, Stan Young introduced “Think Green”, the newsletter of the Ontario Forage Council. A year later, he developed and edited “OSCIA Briefings”, a quarterly publication of the Ontario Soil & Crop Improvement Association.

Stan was instrumental in developing the Ontario Forage Masters Program with the Ontario Soil & Crop Improvement Association. This program recognized farmers who grew superior crops and then he enlisted them to speak about their successes. He introduced and organized the OAC Diploma course “Weekly Farm Visitation Program” for first and second year Diploma in Agriculture students. This was later called the Agricultural Field Studies course. Stan also developed the continuing education course, “Waste Management, Hazardous Wastes and Composting” in 1991.

At one time or another, he spoke to virtually every local county Soil & Crop Improvement Association branch in the Province. He judged at a host of fall fairs, exhibitions and the Royal Agricultural Winter Fair. He also conceived and organized many conferences such as the annual OAC Conferences held during the first week of January and the OAC Outstanding Volunteer Awards Banquet to recognize farm and rural leaders.

He played a leadership role in raising funds for projects at the University of Guelph such as the Johnston Hall Clock Tower, the Water Garden, the Johnston Portico and the 50th Anniversary Scholarship project of the Class of ’49.

Stan personally established a scholarship in Agricultural Communications in OAC’s journalism program just two weeks before his untimely death on December 30, 2004. It now continues as a Memorial Award under the OAC Alumni Foundation. No matter what the task, Stan Young always went beyond the call of duty with innovation, dedication and timelessness. His effectiveness was enhanced by his wry sense of humour.