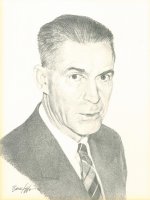 Born in Essex County, William Wallace returned to Woodslee to farm after graduating from the Ontario Agricultural College, Guelph, in 1923. He became active in farm organizations such as the Essex Farm Bureau, the Federation of Agriculture, the Soil and Crop Improvement Association and the Plowmen’s Association. In many of these he held provincial executive positions, including Ontario Soil and Crop Improvement Association President in 1952.

A pioneer grower of seed corn and soybeans, he became Chairman of the Ontario Seed Corn Growers’ Marketing Board, Vice-Chairman of the Soybean Marketing Board and Canadian representative to the American Soybean Association. He was named as Eastern Member of the Board of Grain Commissioners.

In his local community, Mr. Wallace was a Director of the Mutual Fire Insurance Company, active in his church and member of the High School Board.

A recognized judge of seed grain, William Wallace provided strong leadership during the rapid changes in corn and soybean production. He received the Meritorious Service Award (posthumously) from the Ontario Soil and Crop Improvement Association.