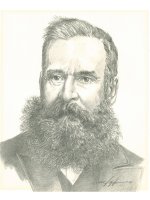 Born and educated in England, William Weld emigrated to Canada in 1844 and established Weldwood Farm in Delaware Township, Middlesex County. For 21 years he actively farmed, raising purebred Durham Shorthorn cattle, sheep and horses. In 1866, he established The Farmer’s Advocate and Home Magazine, which was to continue as the dominant agricultural journal in Ontario for 99 years.

Mr. Weld was an influential friend of Sir John Carling and encouraged him to establish the Dominion Experimental Farm System and develop the Ontario School of Agriculture in 1874. He was one of the early planners for the Provincial Fair in Guelph, a founder of the Dominion Grange, and a sponsor of the Canadian Livestock Breeders’ Association. Several generations of Ontario farmers were greatly influenced by his column “Weldwood Jottings”, through which he advocated soil and water conservation, diversification into fruit and dairy farming, and the establishment of permanent pastures.